"I am trying to reconnect humans with the natural world" 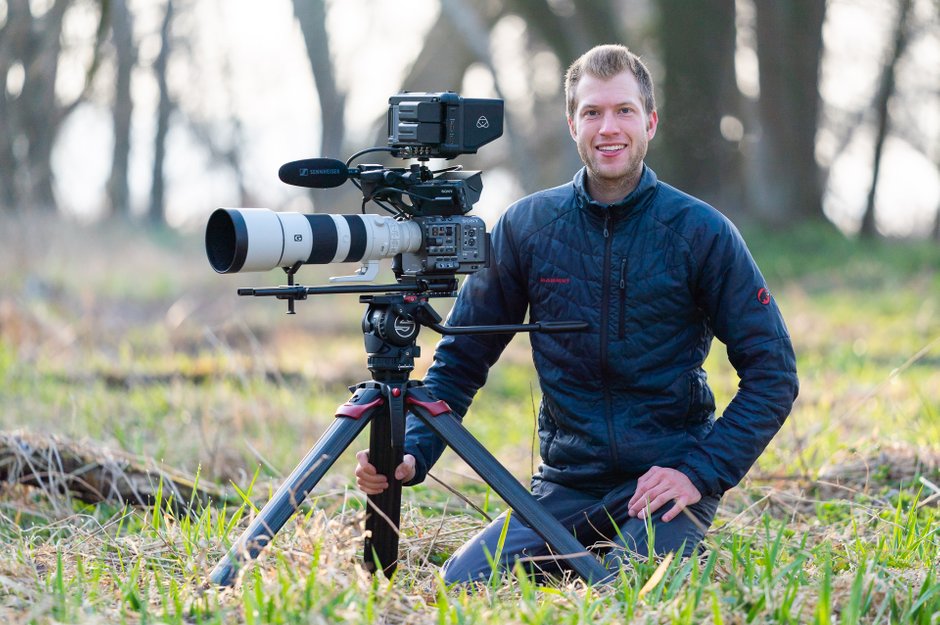 Scroll down for pictures from the wild!

My name is Niklas Weber, I am a 26 year old widlife cameraman, photographer, storyteller and conservationist from Germany. With unique wildlife stories and perspectives, I am trying to strengthen the connection between humans and the natural world.

I am specialised in filming with

I am also comfortable shooting

My life was quite ordinary until 2012. But as if by a flash of inspiration, my life changed abruptly.

I wanted to learn to photograph, so I bought my first own SLR camera.

Gradually I discovered nature photography for me. First and foremost, I just photographed landscapes, where I always wanted to create new perspectives, often I wanted to use even longer exposure times, even deeper, more wide-angled and even closer.

But after some time I also wanted to photograph animals in the wild. I started by photographing birds, deer and foxes on my doorstep, which was absolutely new to me. I had to learn to camouflage myself and get a feeling for the wild animals.

A short time later I traveled to Costa Rica for the first of three times. After only a few hours of traveling in Costa Rica, I was absolutely thrilled with nature, biodiversity and the awesome people. I was so excited about this country, that I wanted to show it to everyone, this was how my live talk COSTA RICA was born.

In the summer of 2018, I won National Geographic's Travel Photographer of the Year Peoples Choice Award in the category Nature with my drone shot "Formation" of the sharp-mouthed crocodiles from Costa Rica.

A month later I fulfilled a childhood dream and traveled to the west coast of Canada in the Great Bear Rainforest. There I was on my way with a tent, my Zodiac and my camera equipment for six weeks. I discovered wonderful untouched areas and met some of the biggest and sexiest animals of this earth, like killer whales, humpback whales, white-tailed eagles, coastal wolves and many more amazing animals! Among them were unique encounters that I could not even have dreamed about!

One of these encounters was the absolutely greatest experience I have ever had with a wild animal. A female wolf came to me on a lonely beach up to ten feet (see picture below), she was totally relaxed, as if it was the most normal thing on earth. My heart was beating like crazy, adrenaline rushed through my veins, not because I was scared, but because I knew that this moment was something very special! She trusted me completely and I trusted her! I haven´t heard about such an encounter with a wild coastal wolf ever before.

It was the journey of my life and I can´t wait for it to start again in 2019, back into the wild!

The new live talk "Canada - in search of the legendary coastal wolves" is expected to be available from autumn 2021.

2018 to 2019 I traveled to Costa Rica for the third time, among other things I dived there with hundreds of hammerhead sharks on the Isla del Coco, which was absolutely amazing. In the rainforests of Costa Rica, I went in search of his spirits, the pumas. I came across a Puma family, a mother with three cubs. I was the first in this area who was able to photograph a complete family. During my search I spent Christmas with the Ticos, got to know their culture better and helped Operation Rich Coast to clean the beaches of Costa Rica from single use plastic like plastic bottles.

Then in May 2019, I traveled for the second time to the Great Bear Rainforest, Canada. I was looking for my coastal wolves again.
Likewise, I got the honor to be able to photograph a potlatch, which is normally strictly forbidden, as it is a very important celebration and tradition of the first nation people. A potlatch is very rarely held, it requires an important occasion, as in this case when Elroy White took over the office of Chief from his father.

In September 2019, I traveled again to the Great Bear Rainforest in Canada to document the salmon migration. Unfortunately, I found that salmon were only returning to a few rivers. Some were totally empty.

In October 2019, I won the prize for the best photography at the El Mundo Festival in Austria with my live talk "COSTA RICA - Paradise between two continents".

In February 2020, shortly before Covid-19 reached Germany and Canada, I was on Vancouver Island on the west coast of Canada to document the unique underwater world for my new live talk "Canada - in search of the legendary coastal wolves". Thereby I dived with countless sea lions, who had at least as much fun diving with me as I had with them (see pictures below). I also dived between Nanoose Bay up to Campbell River and caught the countless anemones, soft corals and sponges with my camera. Sometimes there are so many that there is not a single free area left on a rock.

Also in February 2020, my short film "Chasing Wildlife" was officially selected for the WCFF 2020.

In late spring 2020, I managed to photograph a pack of European grey wolves with pups in Saxony. The footage will help me to further educate people about our wolves in Germany.

Then, in the summer of 2020, I was drawn to Abruzzo, Italy. Because in Abruzzo the wolves were never exterminated, unlike in Germany, the people there know how to live together with the wolf. Especially the guard dogs help the shepherds to keep the wolf away from the animals. I was able to document how the dogs looked after sheep, goats, cows and even horses.

In the year change from 2020 to 2021, I then made the decision to pursue filmmaking more intensively. I bought the Sony FX6 which is part of the Cinema Line from Sony Professional. So from now on I can also provide broadcast standard footage.

Immediately afterwards in February and March 2021, I filmed a story in Germany for an upcoming documentary series by NatGeo WILD and Off the Fence.

In October 2021, I accompanied a research expedition with BINCO to the Democratic Republic of the Congo (DRC) as a photographer for WWF.

It was WWF's first large-scale research expedition in the DRC with six leading experts from BINCO and myself as the photographer, to an area that had never been visited by researchers before. During the expedition, significant observations were made and a new technology was tested that can help to better determine the population of bonobo, as well as other primates, in the future, and to identify hotspots of individual primates to better protect them from poaching and habitat loss. I extensively documented the biodiversity, the expedition, the work of the researchers, the threats to the ecosystem as well as the people and conservationists on the ground. The preliminary report of the expedition is available HERE.

In April 2022, two of my pictures have been highly honored at the GDT Nature Photographer of the Year Award.

Also in April 2022, my short film "MONO - the biodiversity in danger" was officially selected for the WCFF 2022.

In May 2022, I travelled to Bulgaria with ZEIT Online and EuroNatur to document the release of two Cinereous Vultures as well as the local livestock farming and the resulting positive and negative aspects for the local ecosystem.

In recent years, I have not only filmed and photographed in Costa Rica, Canada, Italy, Germany and the Democratic Republic of the Congo, but also in Romania, Bulgaria, Austria, Switzerland, Finland, Poland, Croatia and Indonesia. I present my best pictures in my portfolio.

But I do not want to keep my knowledge and experience to myself, so I pass it on to social media platforms like YouTube and Instagram under the name Photo Niklas.

Well, enough of the many words, look around on my website, check out my portfolio and feel free to contact me with any questions, suggestions or offers of any kind.

I am very grateful and happy that I have sponsors who provide me with the necessary equipment and the right software. This allows me to capture unique moments and later reproduce them on the stage in the highest quality.